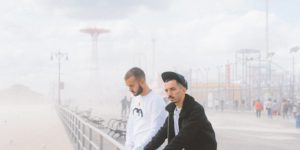 French duo BigFlo & Oli will come to New York this fall for one night at (Le) Poisson Rouge on Wednesday, September 18 at 8:00PM.

The two brothers hailing from Toulouse recently released La Vie De Rêve (Dream Life), their third album to rave reviews in the French press and are poised to bring their brand of hip hop to the States.

The brothers made a name for themselves with their certified triple platinum second album, La Vraie Vie, in 2017, which produced hit singles including “Dommage” and “Papa”. As an indication of their popularity, on YouTube “Dommage” has over 169 million views and “Papa” has over 30 million views. La Vie De Rêve continues their socially-conscious style, with songs addressing topics like death, war, and the European migrant crisis.

Refund Policy & Terms of Service: LPR does not issue refunds or exchanges for ticket purchases. All sales are final. No refunds will be processed for unused tickets or for patrons who are denied entry due to not having valid identification for will call pickup or admittance to an age restricted event. Events are subject to change in date, time, reserved seat location or scheduled act at anytime. In the case of an event cancellation, refunds will be provided via the method of payment originally used. Resale of any ticket at a price greater than the original ticket price is absolutely prohibited. We have the right to revoke or reclaim possession of any tickets from the buyer who violates such restrictions.